How I Hacked Notion For My Job Search

When I first started looking, like seriously looking it'd been a number of years before I'd seriously done anything you could consider an actual search for a new job. This was mostly, well entirely out of the fact that I'd left my previous job so I actually needed to find something and couldn't just "sort of look".

When I started researching and applying, I was at first entirely overwhelmed by the various sites, application processes and the need to keep track of everything. Scheduling interviews, determining where I was in the process, keeping track of notes, pulling up job descriptions (which I found they will sometimes change on you!). Luckily I'd discovered Notion a few months earlier and had been using it in my last role as well as to organize my personal life.

If you haven't heard of Notion, I like to describe it as if Trello, Airtable and a wiki all had a baby. It's powerful and has a ton of great features you'd expect, plus it has a great mobile app. Anyway, if you've to actually check it out (referral link) you should. It's kind of the entire point of this article.

The name of the game is keeping track of what you've done, which hopefully is researching and applying for jobs you're interested in right? With so many job sites, so many roles (hopefully), you want to make sure you don't accidentally apply for a role on one site you might have applied for on another (not like anyone would ever accidentally do that...). It'll also be helpful as you go through the application process to know where you are in the current process.

My first version of the table ended up using the company as the key, but I soon realized larger companies sometimes had multiple roles which I might be interested in. So after some Spreadsheet-fu, I overhauled my table to key off of the job title instead. Okay, so what does the high level basic table look like? 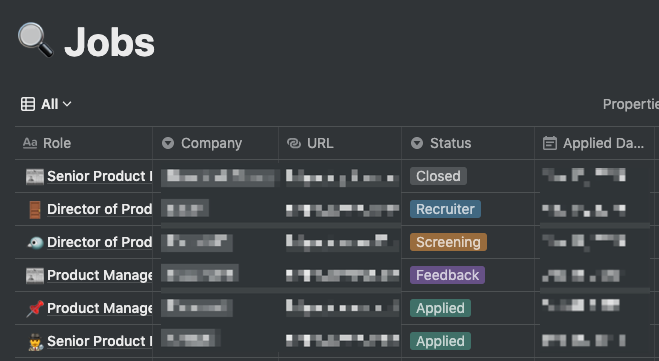 As you can see the main id is the Role, which I'll come back to. The other fields are: 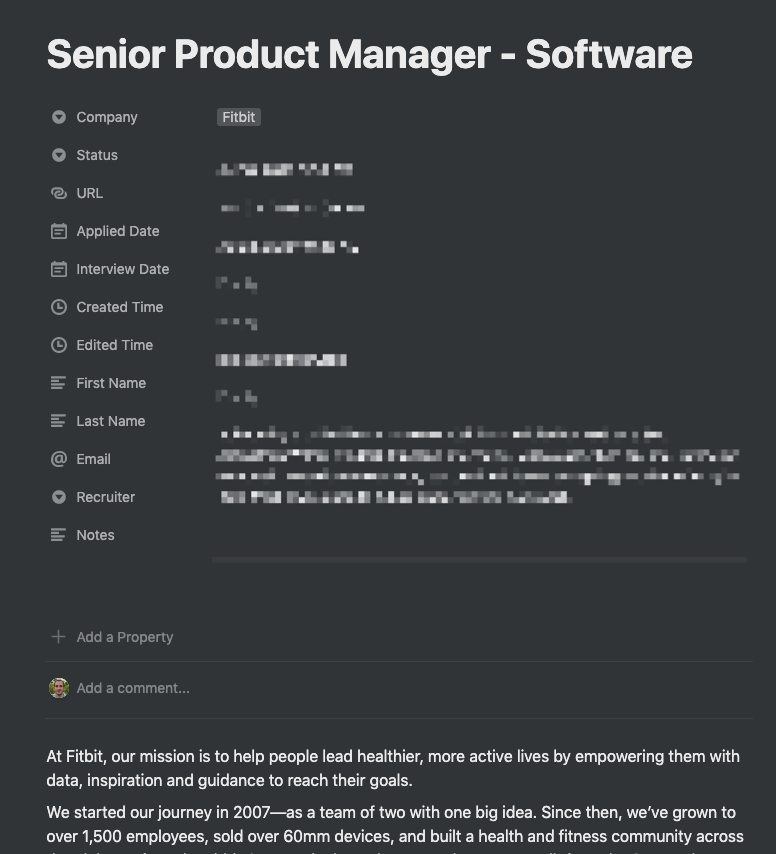 So I mentioned how helpful Filtering was, I had a number of Filters I used to stay focused including:

The Filters I found most useful was Interviews Today, Interviews Yesterday and In Progress.

So the one downside with Notion is the lack of API support currently, which means I have never been able to plug it into other services. So as much as I wanted to have interview dates automatically populated in my calendar, I still had to do things manually (which is why there was no Filter for Interviews Tomorrow since I relied on my calendar).

That said there are ways to automate adding upcoming Interviews to a calendar from a spreadsheet (just not from Notion at this point) which I'll cover in a future post.